My last four posts have been about our public spaces—two national parks and two national monuments. With increased petroleum and mineral exploration and drilling in and near our preserved lands, it behooves us to learn more about the places that may be threatened by the current U.S. administration.

In June we visited Dinosaur National Monument, an out-of the way park that straddles the boundary between northwest Colorado and northeast Utah, on the southern flank of the Uinta Mountains. The Utah part is known for its vast store of dinosaur fossils, whereas the Colorado part is known for its canyonlands cut by the Green and Yampa Rivers.

Park entry near Vernal Utah, called “dinosaur land of Utah”; view to the east across the Green River to Split Mountain.

A vast number of dinosaur bones have been recovered from sedimentary rocks within the park. The majority were wrapped in plastic and hauled to the east coast for assembly in Pittsburg at the Carnegie Museum of Natural History, which funded most of the excavations. You can view the reassembled dinosaur bones in Pittsburg. The National Monument preserves a piece of the most fossil-laden layer of sandstone, which has been almost completely excavated.

The tilted layer of sandstone is protected from the elements by a roof and visitors can see how the fossils are distributed. Paleontologists think there was a great drought and dinosaurs perished next to a dried-up river. When the rains resumed, the bones were caught up in the renewed river flow and carried downstream, where they were deposited along with sand in a channel. The bones got separated, which must have made reassembly—figuring out which bones went together—quite difficult. 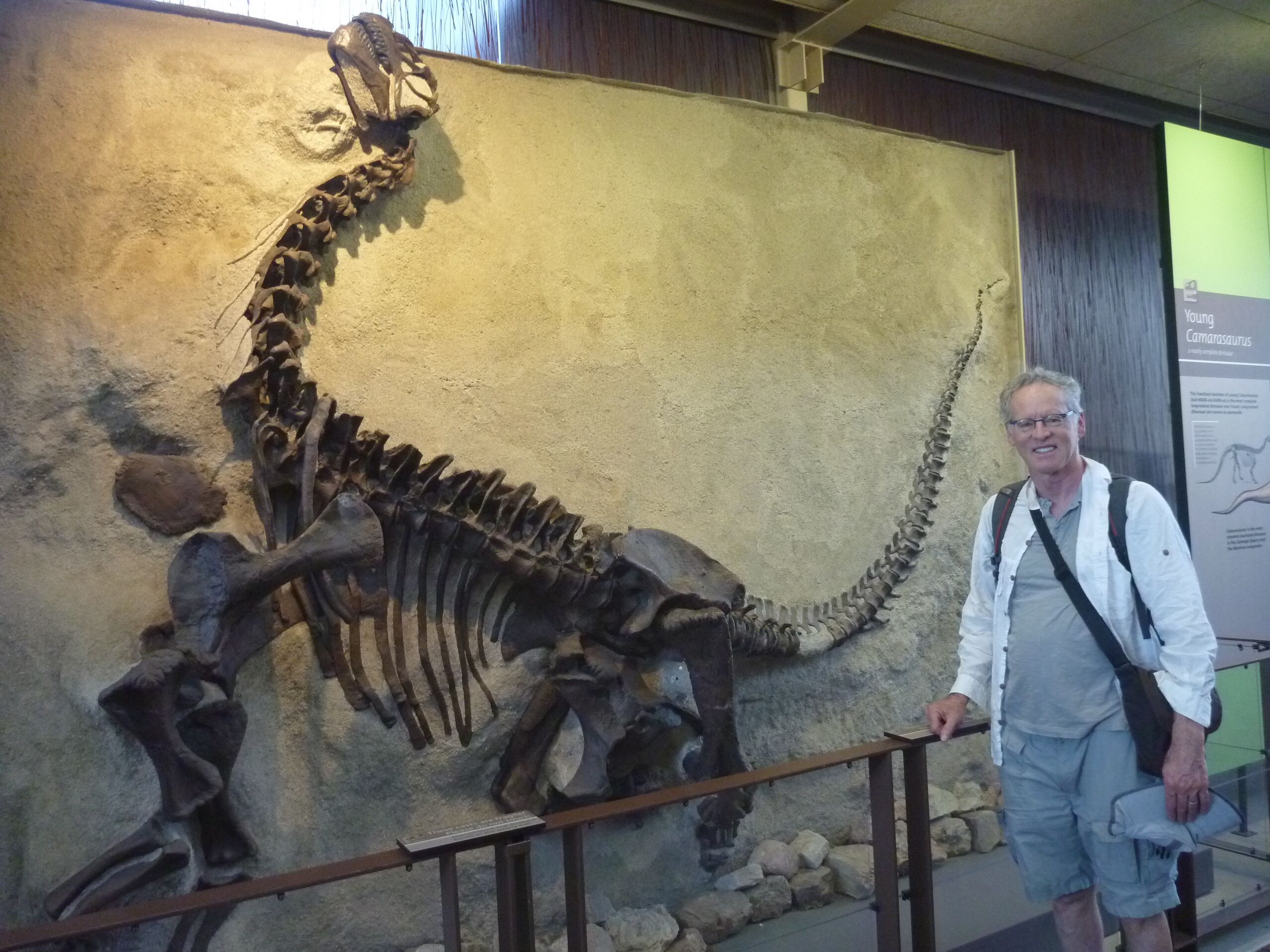 Some dinosaur specimens can be viewed at the park; for example, this allosaurus, the species that is Utah’s State fossil. 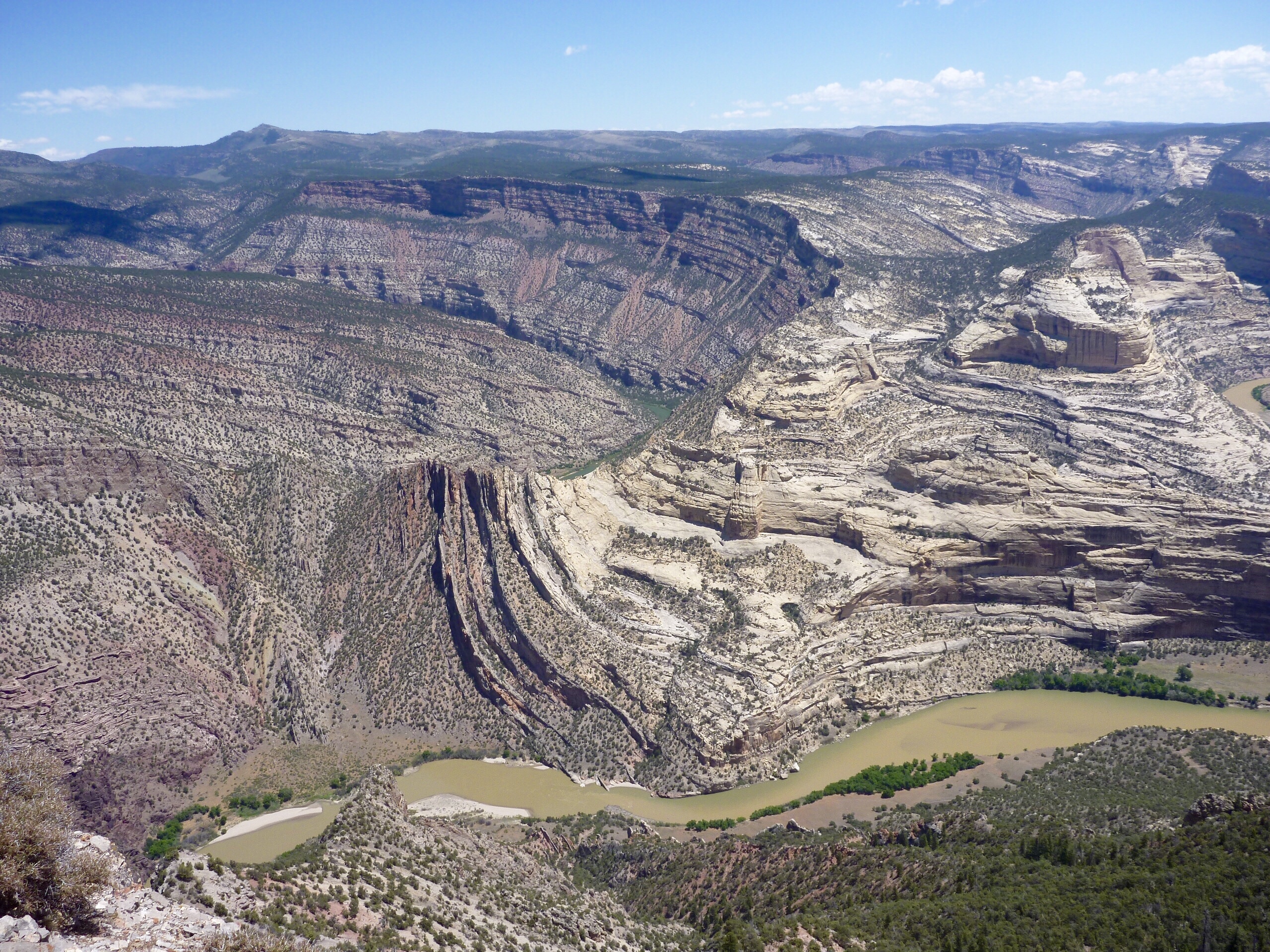 In the Colorado side of the park, visitors can drive and hike to incredible overlooks of the Green and Yampa Rivers that have cut down through sedimentary rocks that were folded and faulted during the Laramide Orogeny about 60 million years ago. This is a view of a major fault that upturned some of the layers. More recently, probably in the last 10 million years, after being buried in younger sediments, the area has been rejuvenated. As uplift of the land has continued, the rivers have cut down through the rock to create the spectacular scenery we can enjoy today. 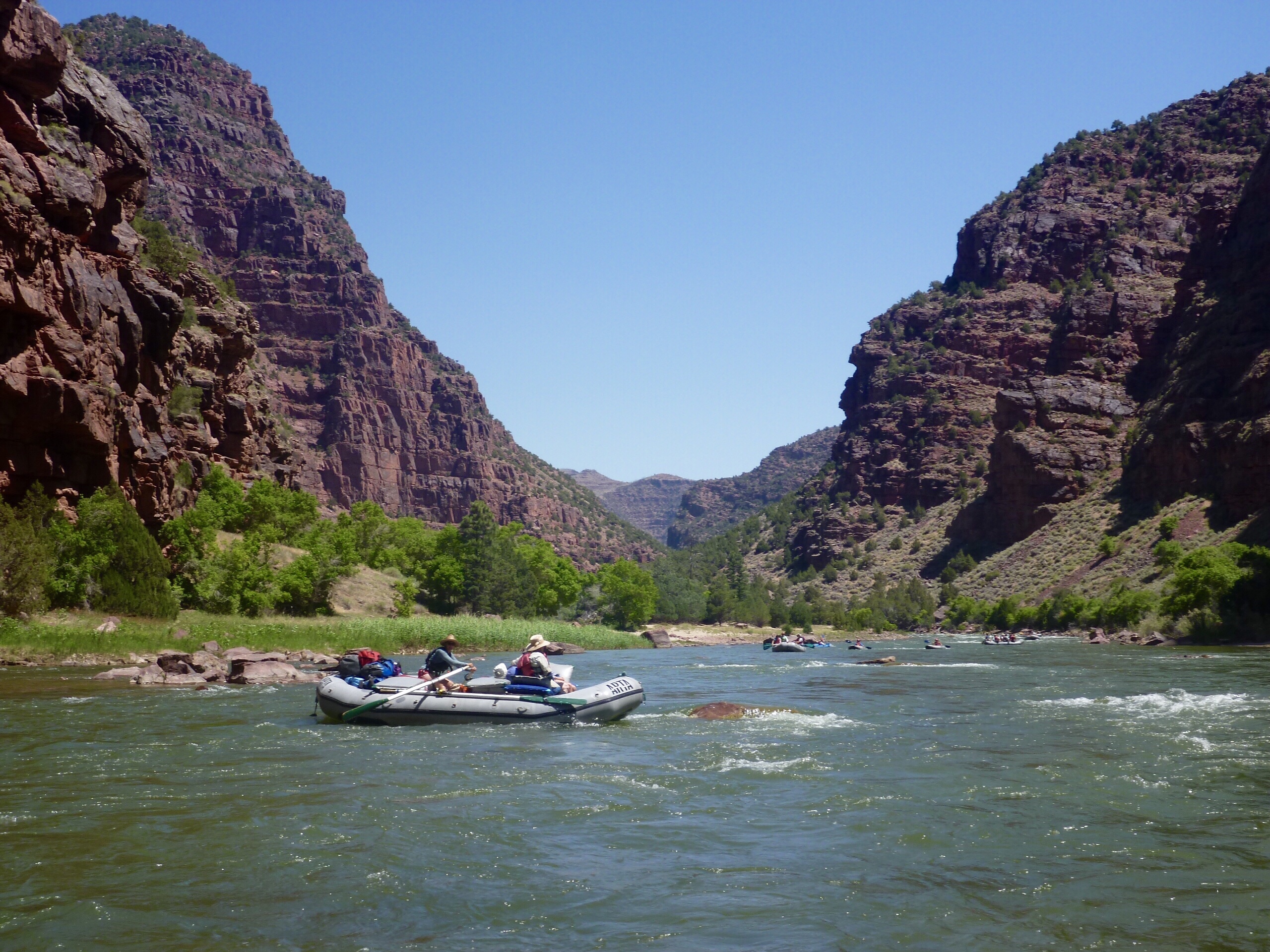 A fascinating way to experience the park is via a rafting trip on the Green and/or Yampa River. Here we are rafting through the Canyon of Ladore, named by the Powell expedition after the English poem “Cataract of Ladore”. The beautiful red walls are made of one billion year old quartzite that is extensive in the region.

The river flows westward, through rocks that are tilted westward, so the trip takes rafters through the incredible vastness of geologic time, from the Precambrian (one billion years ago) to the Cretaceous (a mere 100 million years ago!). This photo is a close-up river view of the large fault previously viewed from above (see overlook photo).

We went rafting with ARTA, an excellent company. They are a not-for-profit group that gives end-of-year proceeds to organizations that work to preserve rivers and other parts of our natural environment.