Seville (Sevilla in Spanish) has been the dominant city in southern Spain for most of the past millennium. Located in the lower part of the Guadalquivir river valley just 60 km (40 miles) from the sea, it was a Roman city that grew greatly in size during the Islamic period after the caliphate (central governance) in Córdoba weakened and individual city states (called taifas) became the centers of power. Seville fell to the Catholic kings in the early 13th century, when the Islamic emirates lost a large part of their territory in Andalusia. It has remained a favorite of kings, who rebuilt the Alcázar through many reigns. In fact, the modern Spanish kings have still resided here when they are in town. Seville is the capital of Andalusia, which is one of the regions in Spain that has been given more autonomy in its own governance.

Here is a view looking north across the city from the cathedral tower. The modern-style bridge across the Gualalquivir should look familiar to anyone who has seen the bridge across the Sacramento River in Reading, CA—it was designed by the same architect! This city, more than any other we’ve visited, juxtaposes old and new at every level. One example in the photo is the steeples of ancient cathedrals (all built on former mosque sites) next to the Metropol parasol (also referred to as “the mushroom”—it’s the beige oval at lower right from the bridge) that is a thoroughly modern structure floating over a large plaza. 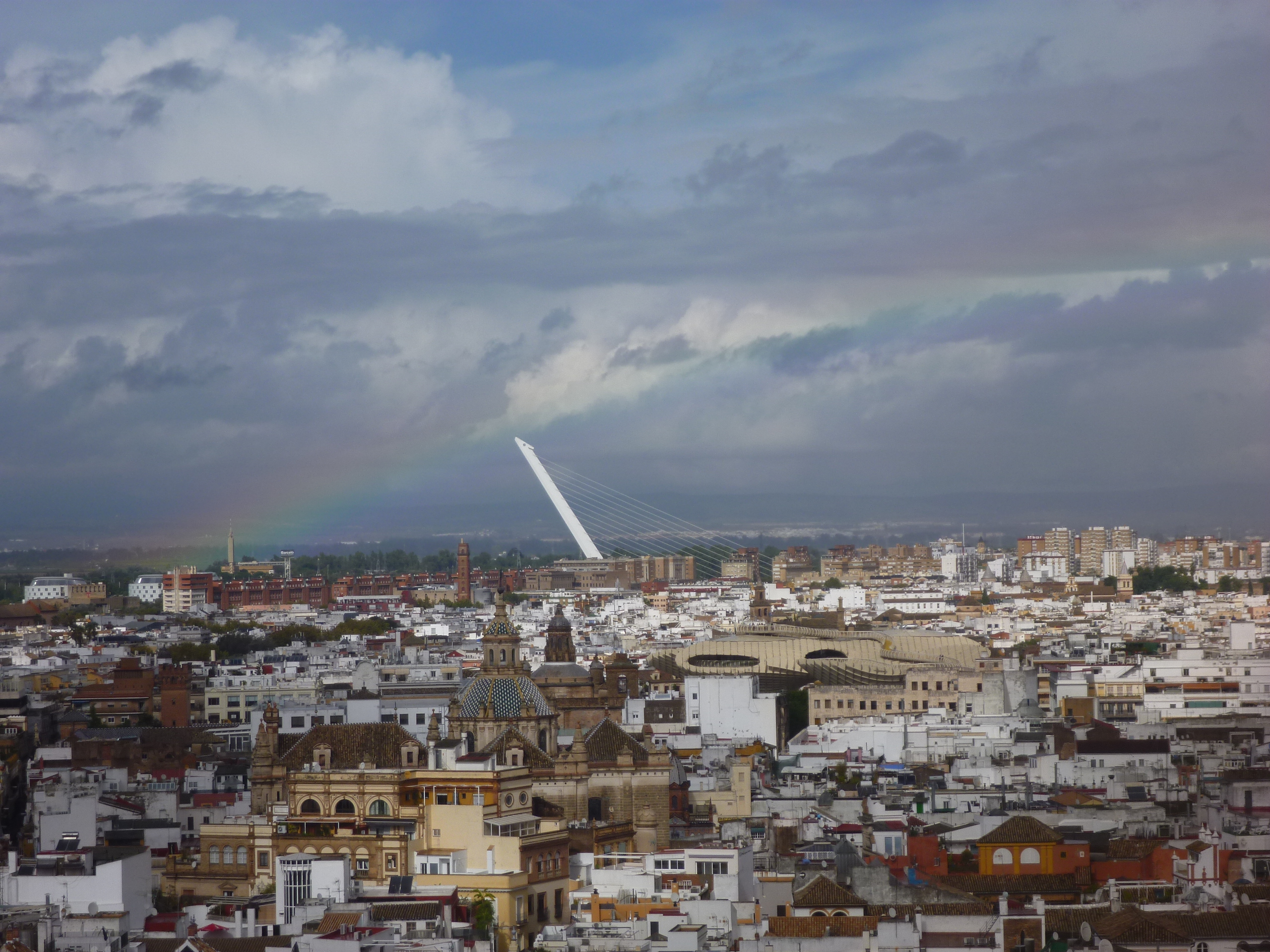 But it is the old monuments that attract large hordes of tourists. The Alcázar is here better preserved than at other cities. The vast walled area encloses immense gardens and a stunning palace that is where the current kings still reside when in town; their part of the palace has limited entry and is called the Cuarto Real—royal quarters. Here is a view across one of the gardens to the palace, with the cathedral steeple in the background. 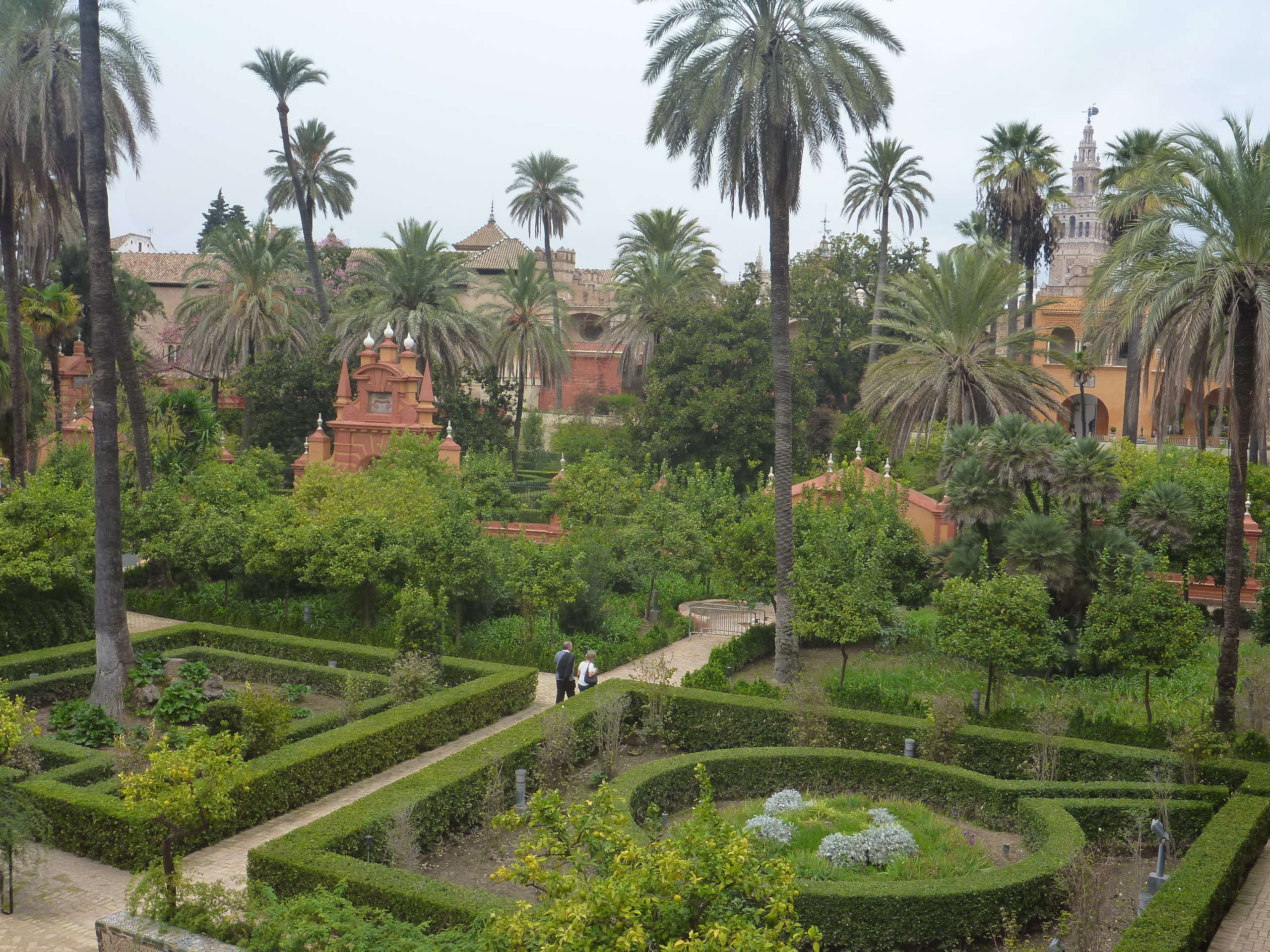 The palace was built and expanded during the Islamic period; the Catholic kings who acquired it in the early 13th century continued to modify and expand it, particularly during the 14th century reign of Pedro I, for whom the palace is named (Palacio de Don Pedro). It is also referred to as the Mudéjar Palace—mudéjar meaning the style of so-called “Moorist” architecture that continued to be used even after Islamic governance was ended. (Mudéjar also refers to the Muslims who remained in Andalusia after the reconquest, but who did not convert to Christianity.) In the 14th century, Pedro had an allegiance with the emir of Granada, which was still under Islamic control. He apparently invited artisans from Granada to work on the palace, and the decoration is similar to that seen in the Alhambra. It’s wonderful to see the stucco work with colors still intact, helping to better imagine what the Alhambra must have looked like during its “heyday”. This view is of the archway and ceiling in one part of the palace. 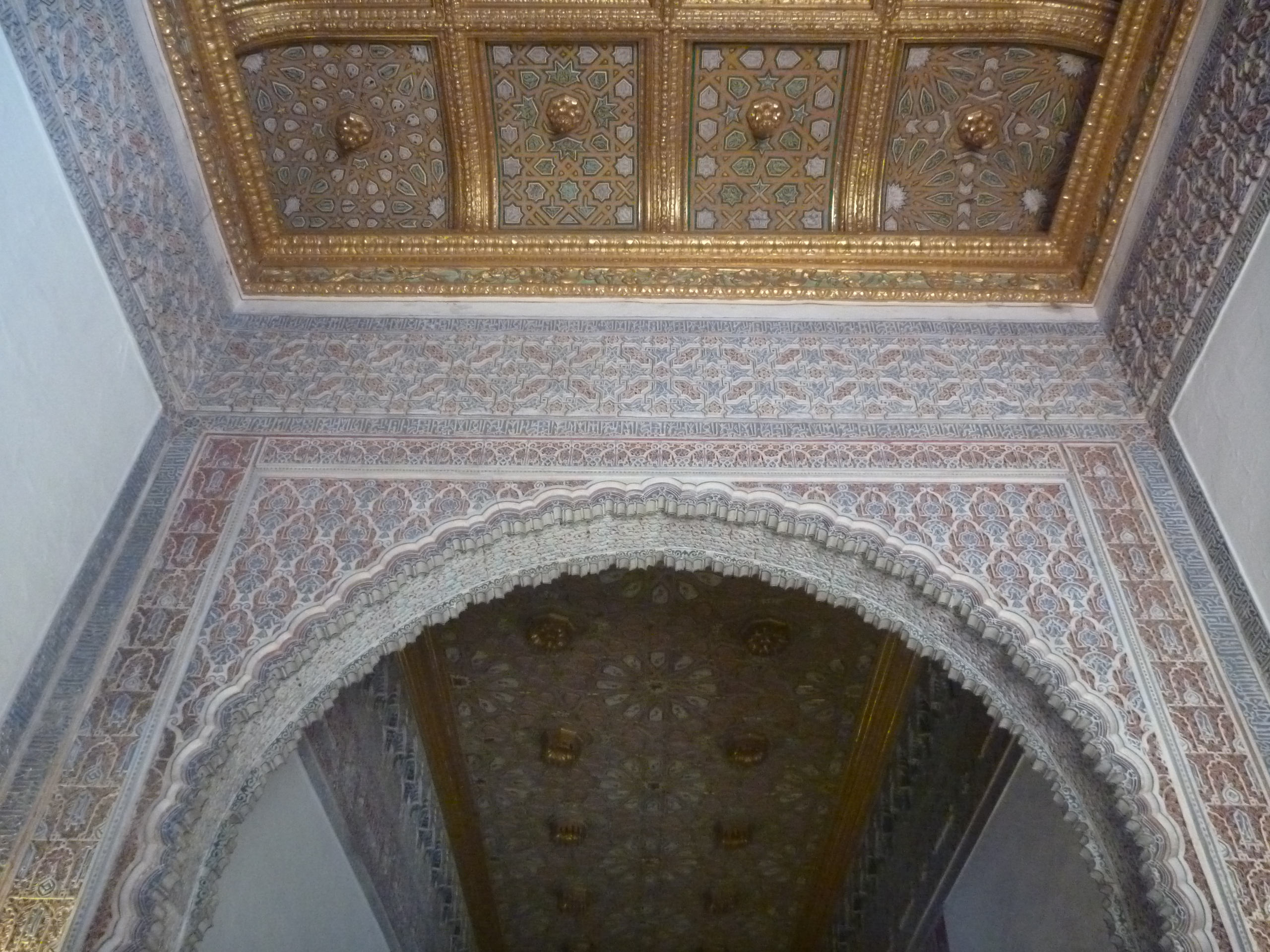 The main cathedral is another big tourist draw—it’s the largest cathedral, by volume, in the world! It was built on the site of the great 12th century Islamic mosque (as almost all cathedrals in Andalusia are); the only thing that survives from the mosque is the tower that was originally the minaret (called the “Giralda”). It looks particularly impressive with the night-time lighting. The very top part was added later by the Catholics. 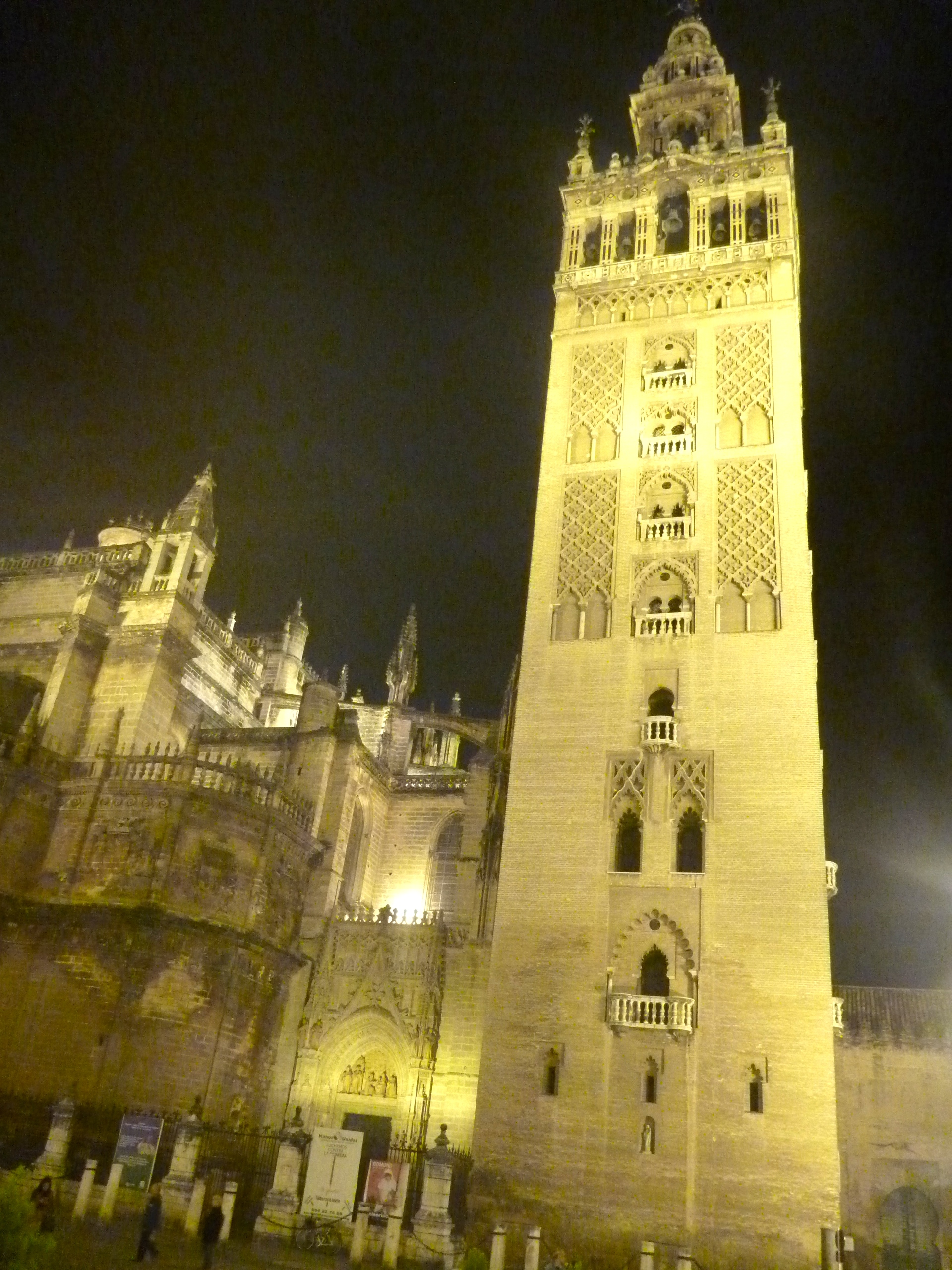 There are many attractions inside the cathedral—one is the tomb of Christopher Columbus, topped with an enormous bronze sculpture (below). In 1503, after Columbus’ initial voyages, Seville was awarded official monopoly on trade with the Americas; it quickly became one of the richest cities in the world. Two hundred years later, trade office was transferred to Cádiz and Seville’s importance declined. As the provincial capital, it is now an economic center, as well as a tourist “must visit”. 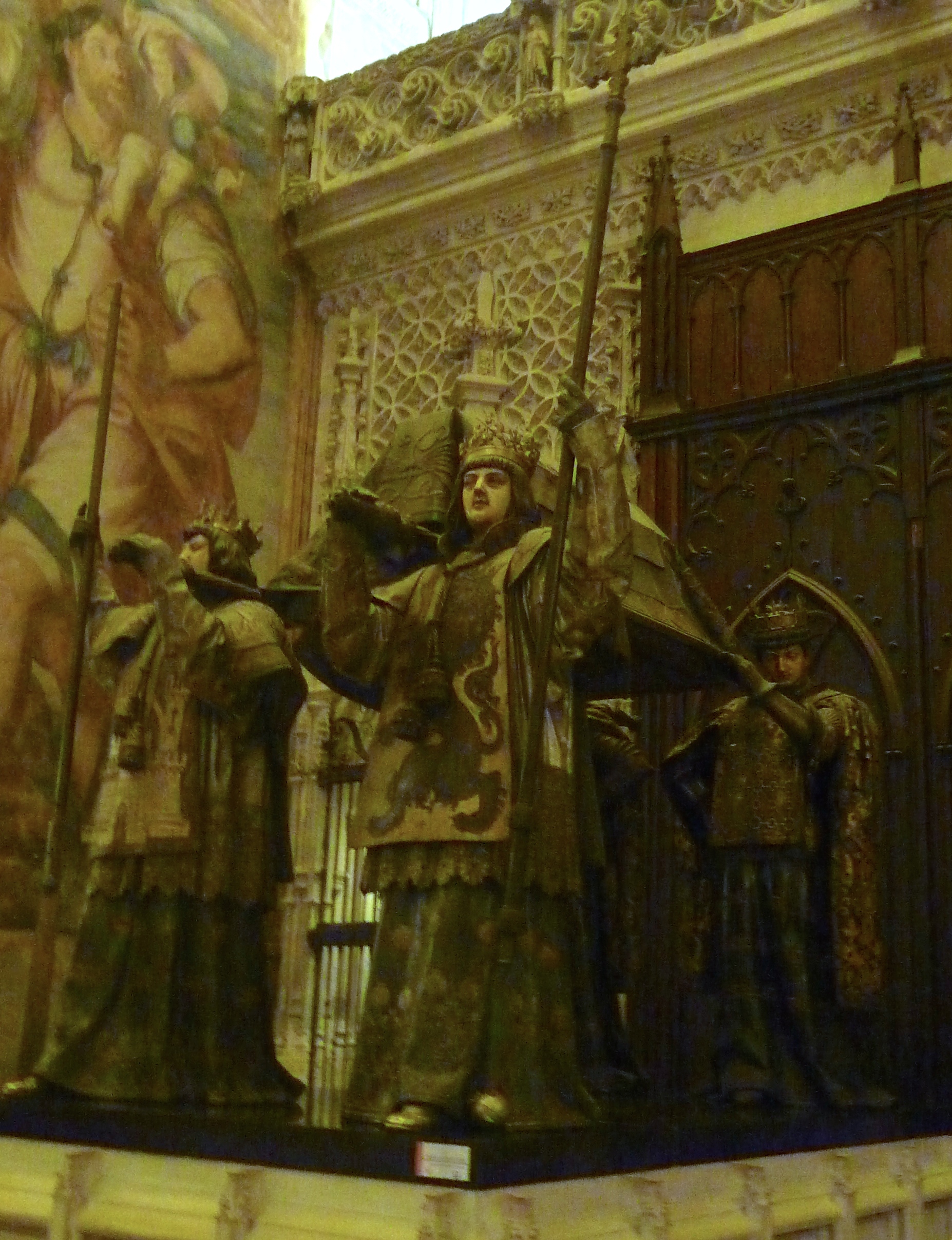 Riches from the “glory” period abound within the cathedral; in fact, we wondered why the Catholic church would not be embarrassed to display so much wealth (but that has never seemed to be an issue for them). One room is called “the treasury” and the intricate objects of gold and silver (acquired from New World mines, of course) and precious jewels nearly blind the eye. Here is a crown that seemed an appropriate photo choice, given the collaboration of church and state that has defined most of Spanish history. 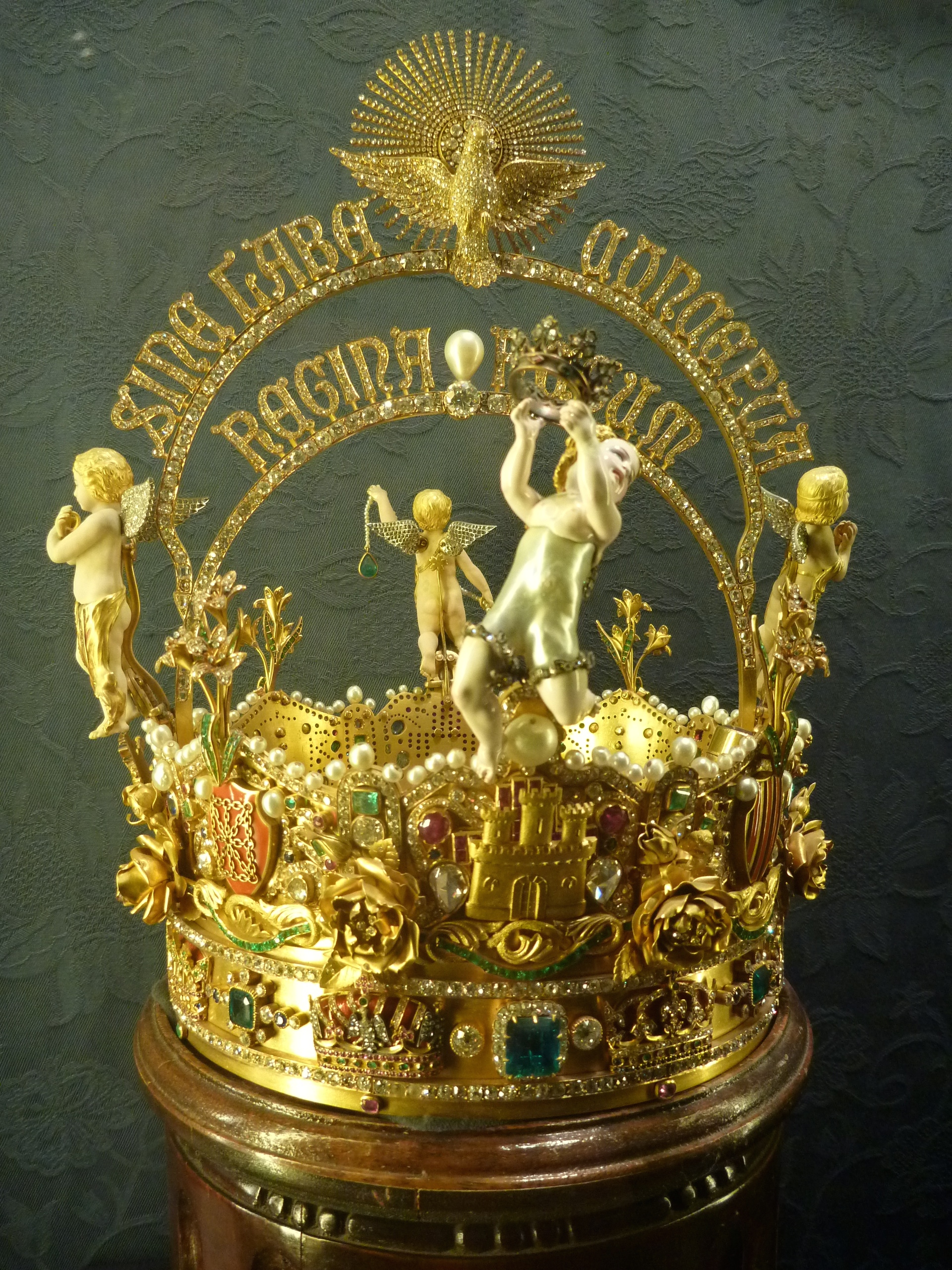 The mudéjar style can be seen throughout Seville, in constructions even into the 20th century. The building in the photo below, now the Museo de Artes y Costumbres Populares (arts and popular culture), was built in 1914 on the Plaza of the Americas for the Spanish-American Exposition in 1929. Other interesting buildings that remain from this exposition include pabellones (pavilions) for countries such as Morocco, Columbia, and Uruguay. 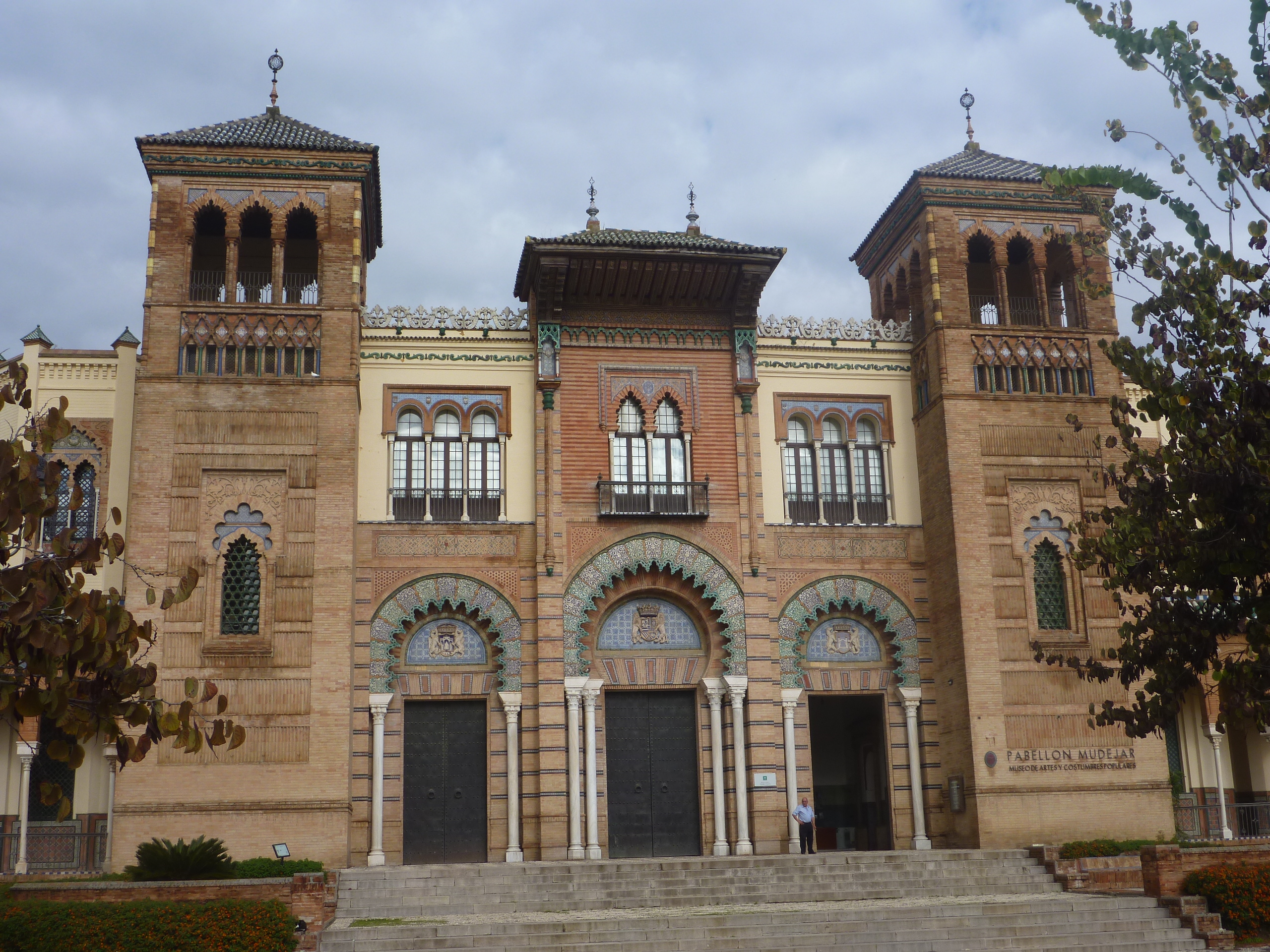 We visited one palace that a condesa remodeled in the early 20th century. It contained a rather jarring juxtaposition of styles. The photo below shows several different styles of tile work. On the right is a style that attempts to copy the intricate mosaic work developed in Medieval Islamic Andalusia and still practiced today in Morocco. But rather than being individual hand-carved pieces grouted together, these tiles are made as a single piece using a mold—much faster and cheaper. On the left is the painted tile work style so prevalent during the Renaissance period. Seville is an incredible place to view all types of tile-work styles. 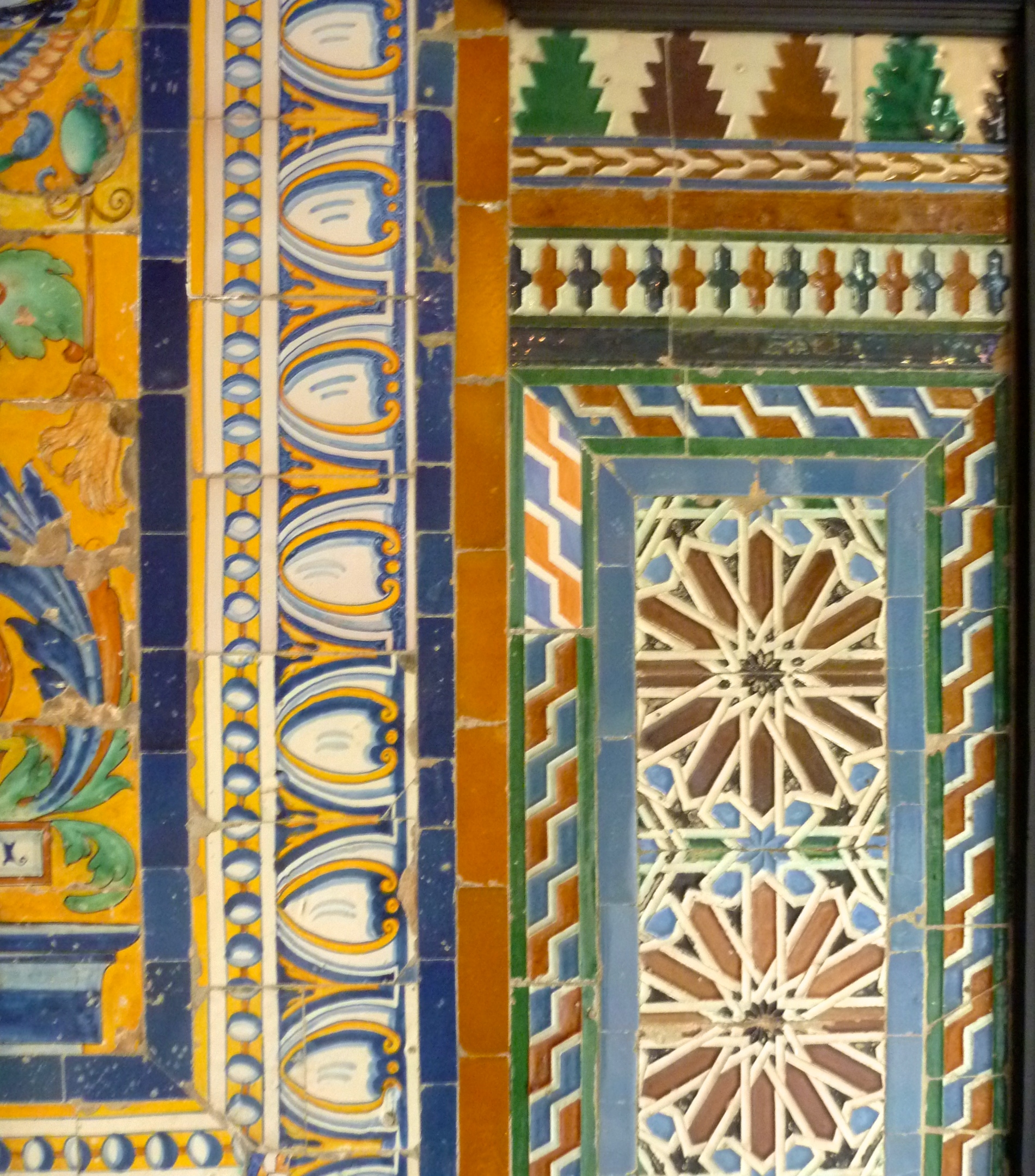 No blog about Spain can ignore the bulls! There remain active “Plaza de Toros” (bull rings) in every town we visited. Here in Seville we had lunch in an old-style restaurant that had a stuffed bull sitting on the bar right in the middle of the restaurant (with blogger for scale)! With that, we leave Andalusia, with its incredible richness of culture and history. It will be worth another future visit…. 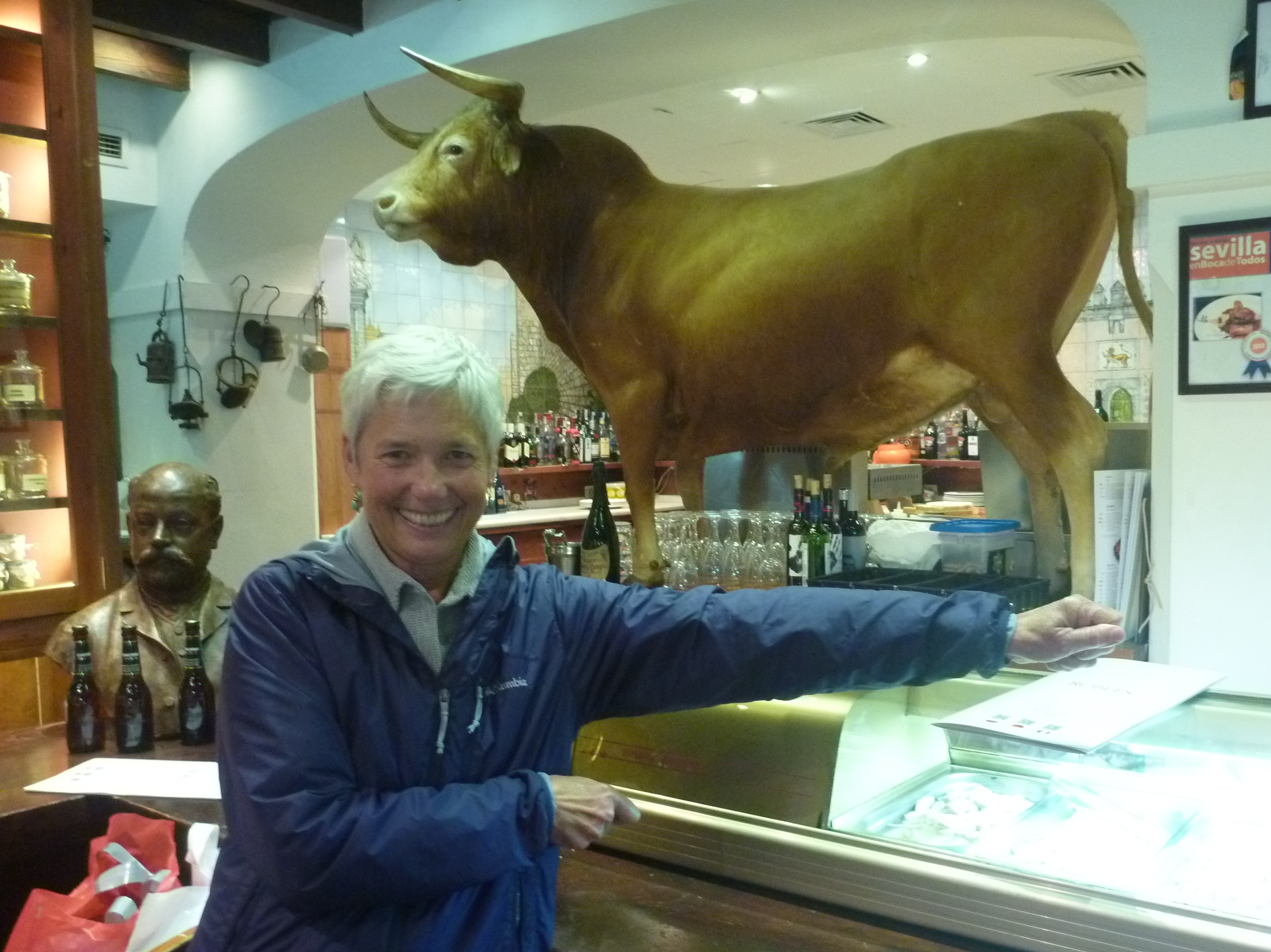