The area around Ronda has a large concentration of White Towns, so called because all buildings within these towns are painted white. Most of the roofs are made of brown or red tile. The area has been inhabited since prehistoric times, and was successively occupied by the usual cast of characters—Phoenicians, Carthiginians, Greeks, and Romans. But it was during the reign of the Moors (711–1492) that these towns developed their distinctive character—they all have the medina’s crazy maze of narrow, winding streets. Fortunately, we went to Fés first, so now we can handle any other medina that comes our way.

Although Ronda itself is considered a white town, it is the smaller towns without modern additions, lying nestled into steep slopes of this mountainous region, that have the most charm. We visited our first small town while on a 49-km bike loop from Ronda. (This region, with scenic mountain roads connecting delightful small towns, is a mecca for hikers and bikers. We rented a bike from CycleRonda, owned by a Dutch guy who will help plan trips for a day or several weeks.) Here is a photo of Alpandeire, which seems to spill down the hillside. We stopped for lunch and encountered a convivial group of locals who helped us find the one cafe/bar that was open on the small main plaza—on what appeared to be the only flat place in town. 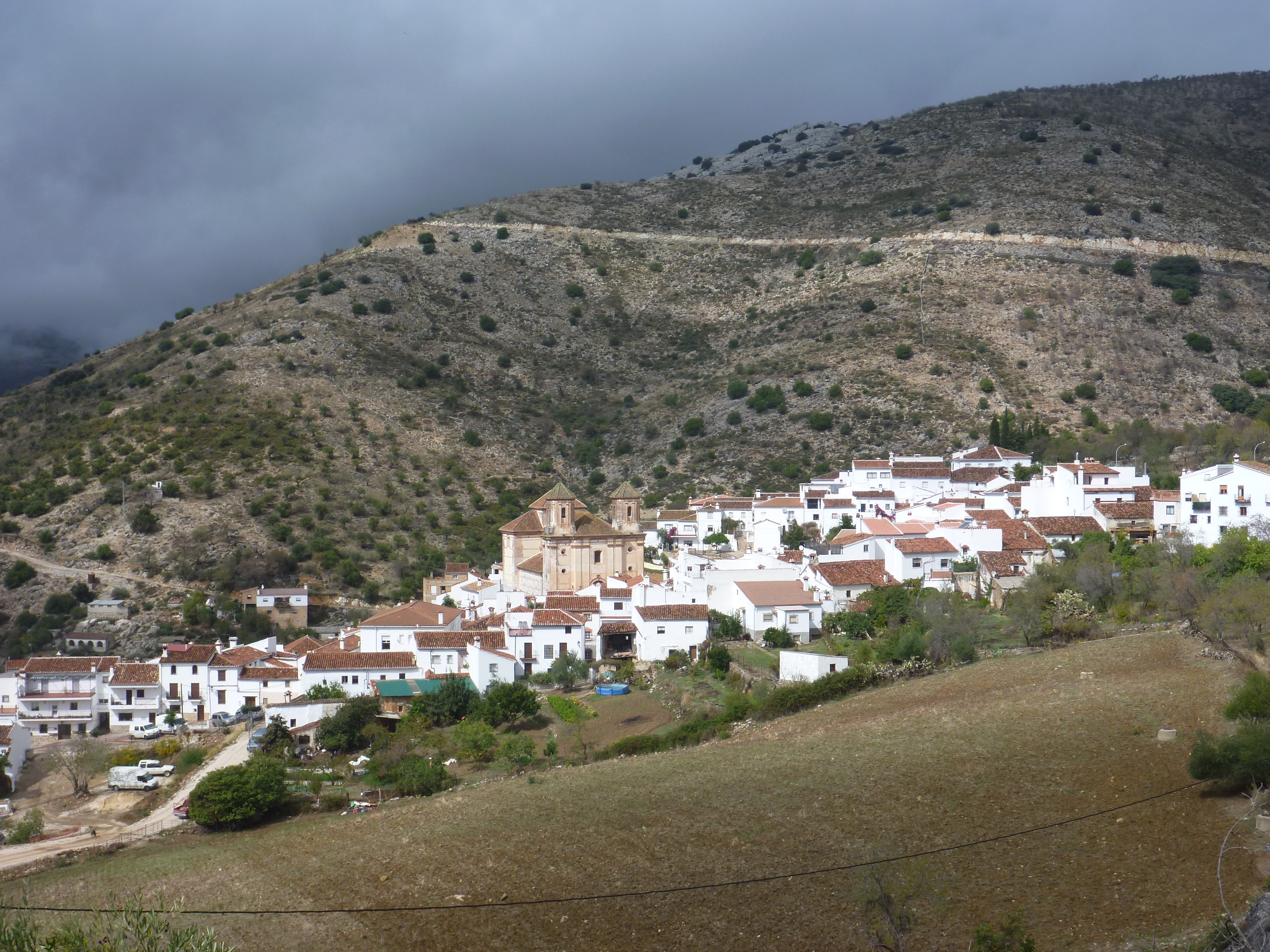 We rode through another town where all buildings were painted blue rather than white. What in the world happened here? Turns out the town was used by Sony Pictures as a set for a 3-D Smurf film (Los Pitufos in Spanish), released in 2011. The buildings were painted blue for the filming and townsfolk were given money and white paint to return their houses to the original white. However, they voted to retain the blue color and seem proud of their distinctive difference. Who knows—maybe they will film a sequel there! The photo below shows a statue of Smurf along the main road through town—with Jay in a shirt of the right color for scale. 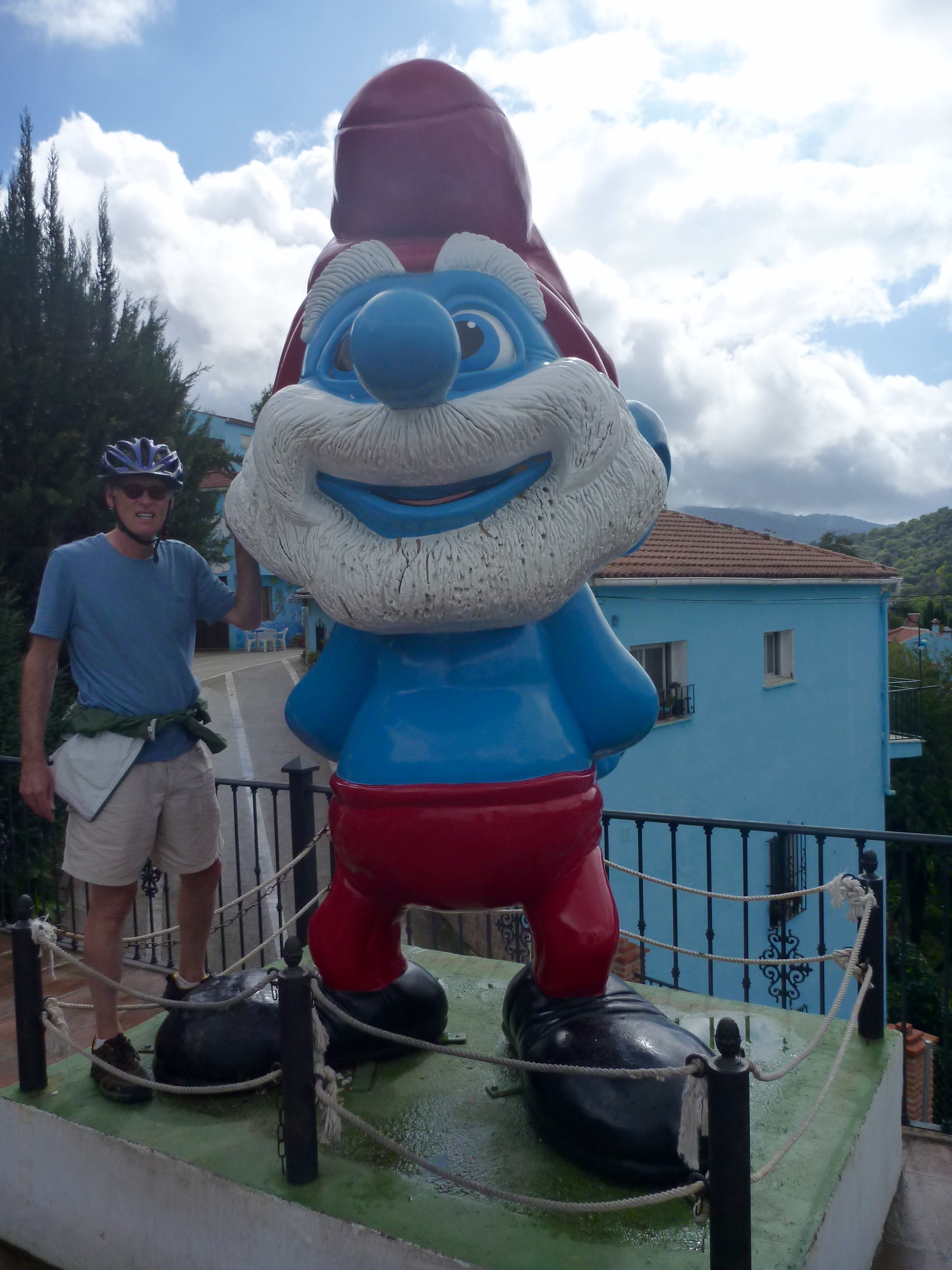 We rented a car on one day to reach some of the towns that are a little more distant from Ronda. It was a wild ride on the precipitous mountain roads! Our favorite White Town was Grazalema, which is an entry point to the Parque Natural Sierra de Grazalema with its extensive network of hiking trails. Here it is, with its stunning backdrop of limestone peaks. 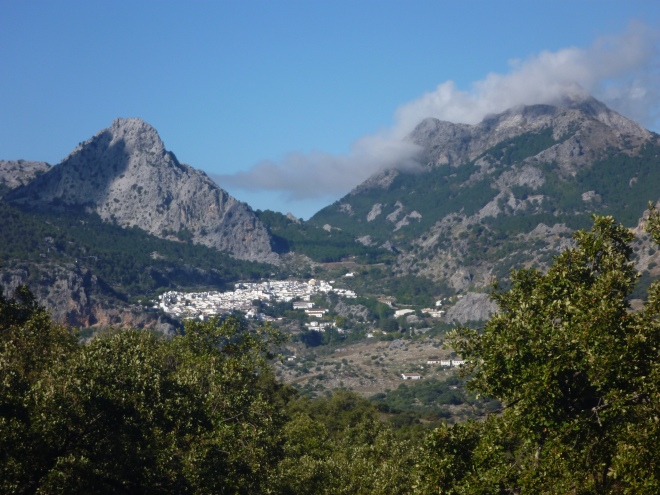 The tidy white houses with their window boxes of flowers along the narrow cobble streets elicited continual gasps of “how cute” during the several hours of our visit. “La Casa de las Piedras” (the house of the rocks) pretty well sums up the setting of this town, which also offers a wide variety of artisanal food products, including the famous Payoyo cheese.

We have vowed to return to explore the many hiking trails that radiate out from Grazalema into the national park. We may choose not to visit, though, during the annual Toro de Cuerda (bull on rope). Unlike in Pamplona, in Grazalema there is only one bull that is tethered to a rope and allowed to run through the town while the “young dudes” alternatively chase or are chased by the bull, while everyone else strives to watch from a safe distance. Less dangerous than the better-known bull running, but still fraught with peril! A statue in the middle of the town’s main plaza commemorates the event.

Another stunning “falling down the hillslope” White Town is Zahara de la Sierra. Here is the church with rock wall as a backdrop. A fortress was built at the top to protect the residents.

It is possible to drive on one road through town, although we parked at the edge and walked in. We had lunch at El Gallo Cevercería (the rooster bar), where local people were chatting animatedly to each other and to other locals who would drive by and stop on the road to chat. This is clearly a culture that works to live, rather than vice versa. People working even the most menial jobs seem to be continually laughing and joking—enjoying life. 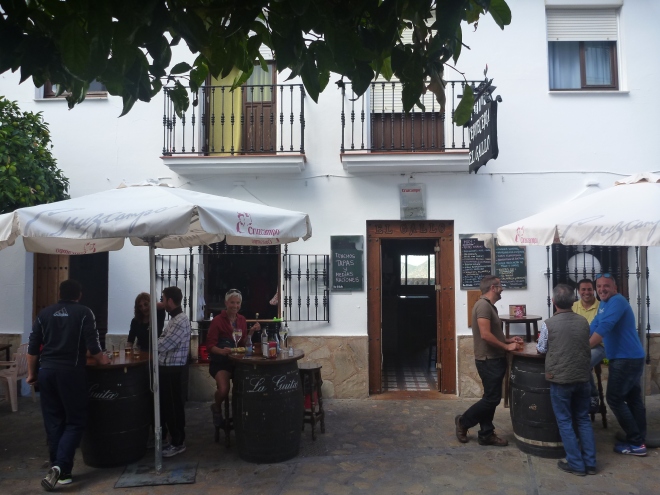 Sentenil de las Bodegas is the strangest White Town we visited. Here the buildings are not just sitting on the slope but built into it. The rock cliff is excavated, and the houses built under the overhanging cliff (see left side of photo below), so that the back wall and roof of the buildings are the natural rock, which remains exposed inside the buildings. It must get pretty crazy when it rains in the winter! This photo is of the main plaza where the barely-one-car-wide main street widens just a little. One person parked just a little too far into the street, causing traffic gridlock for about 30 minutes—a complete standstill. The restaurant waiter just laughed—it happens every day!

The mountain peaks in this area are made of limestone formed from the shells of marine organisms in the ocean that existed between Europe and Africa before their collision. Limestone is suceptible to chemical weathering (i.e., it dissolves) but in this semi-arid region it is able to maintain high topography, unlike the limestone valley where I grew up in Maryland, which is very humid. The recent tectonic activity also creates the rugged topography. In this area are many thrust faults—they result from compressive forces that thrust older rocks upward on top of younger rocks. The thin, rocky soil that forms on limestone is just fine for the ubiquitous olive trees that require little fertility or water. Here is one more photo, with limestone peaks and fields of olive trees on more gentle slopes.

Final language note. You may notice that none of these town names sound Spanish. That’s because they are not! Most are Spanish adaptations of Arabic names from the Islamic (Moorish) period. For example, many towns start with “Ben” (e.g., Benaoján) which is a spanishization of the Arabic “ibn” meaning “son of”. In the Spanish language, in general, many words, including most that start with “a”, were adopted from Arabic. This includes the name of southern Spain (Andalucia) which is only slightly changed from the Arabic word for the region (Al-Andalus).