Argentina—a paradise for fossils of dinosaurs and proto-mammals

We visited Parque (park) Ischigualasto, which means “the place animals go to die” in the local indigenous language. The native people saw many bones in the region, which was the reason for this name. Later, of course, these bones were recognized as animals that have long been extinct. We also visited the Museo de Ciencias Naturales (museum of natural sciences) in San Juan, the capital of the province of San Juan where a variety of sites with dinosaur and other Mesozoic fossils have been found. 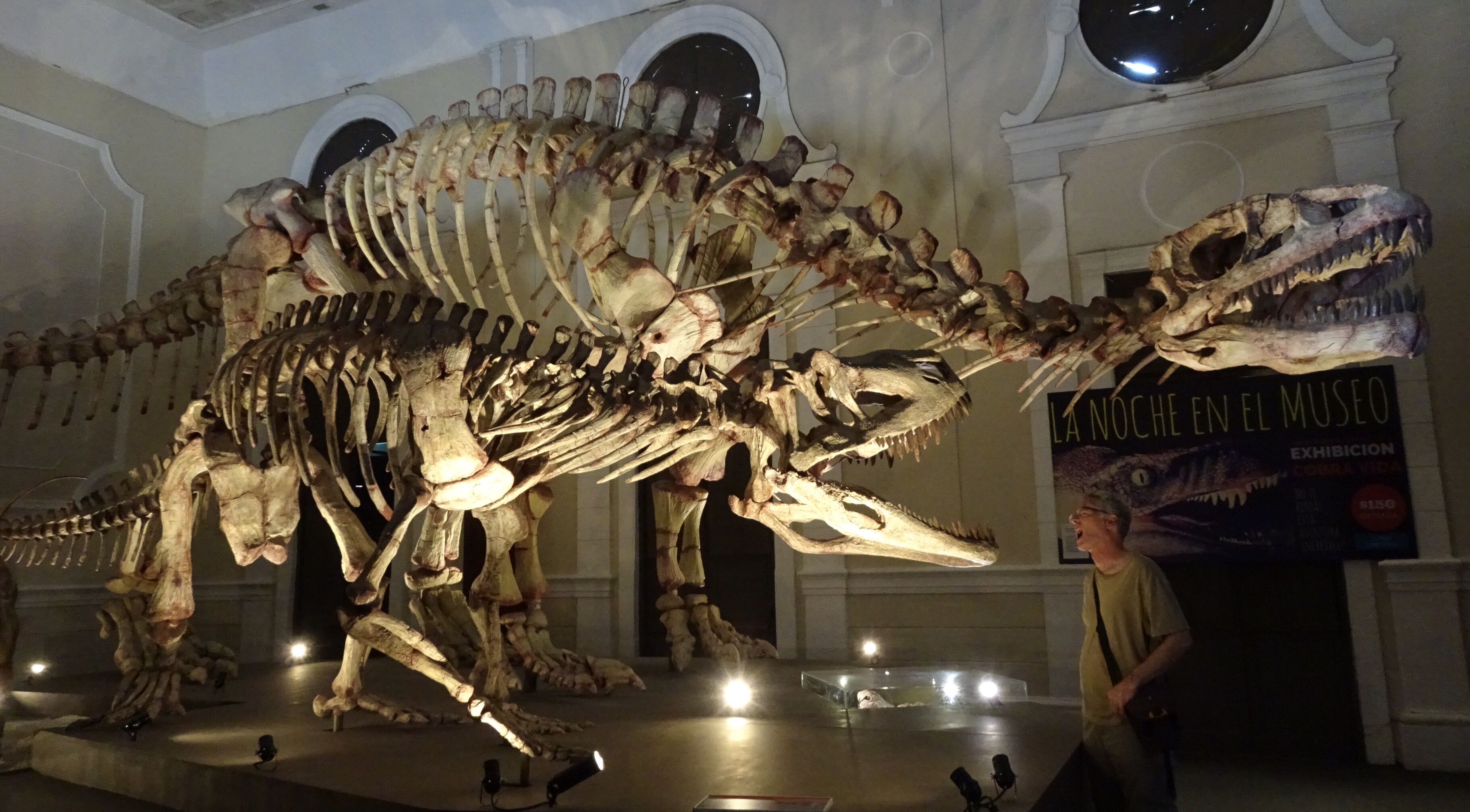 Here are the bones (some parts are reconstructions) of two giants found in the area around Ischigualasto that are now on display in the museum of natural sciences.

This area is called the “world-wide cradle of dinosaurs” because the earliest examples of dinosaurs have been found here. The incredible preservation and variety of animal bones have changed ideas about dinosaur evolution. For example, it was discovered that dinosaurs evolved more rapidly, and with a larger variety of species, than had been previously thought.

Here is an example of one of the earlier animals, which are ancestors of the modern crocodile. But the early animals were much larger and lived on land rather than in water.

One of the surprising findings was a variety of so-called proto-mammals that had characteristics of both reptiles and mammals.  It was astonishing to learn that some these proto-mammals were quite large. They thrived toward the end of the Triassic, but most perished during the end-of-Triassic extinction. After the extinction, the dinosaur group expanded greatly throughout the Jurassic and Cretaceous Periods, whereas the mammal group was reduced to small numbers and sizes. The mammals got their revenge, though, when the end-of-Cretaceous extinction (the famous one that resulted from a meteorite impact in the Yucatán), destroyed all of the dinosaurs and the mammals found vacant niches to occupy, resulting in a huge expansion in their sizes and numbers throughout the Cenozoic Era.

This cute girl (ha!) had characteristics of both reptile and mammal. She fed her young just like mammals do today. Although we might not like the idea, she had many characteristics that we do and is on a direct line that eventually led to the human species!

In San Juan Province paleontologists also found dinosaur footprints, which are very rare. One type was of herbivore sauropods that are the largest dinosaurs ever found. The largest specimen ever found was in Argentina, but at a site farther south in Neuquén Province. It was named Argentinosaurus and was nearly 40 meters (~130 feet) long and weighed nearly 100 metric tons.

In the natural science museum there is a replica of the sauropod’s belly and legs. It’s hard to imagine how much plant material this animal had to eat each day to sustain its huge bulk.

Although we couldn’t see any active excavation sites in Parque Ischagualasto, we did get to see the Triassic sedimentary formation within which these dinosaur fossils have been found. This photo shows the river deposits, which look much like the Morrison Formation in Colorado, where dinosaur fossils have also been found. The area is called “Valle Pintado” (painted valley).

The park has other interesting geologic feature (geoforms), such as round concretions that are formed by crystals of quartz or calcite that cement sand grains together to make a hard resistant rock. This area of concretions is called the “Cancha de Bochas” (bocce ball court).

We also visited the nearby Parque Nacional Talampaya, where Triassic-aged sediments have been eroded by water and wind into fantastic shapes. Note the white pickup truck for scale, in front of the sheer sandstone cliff. 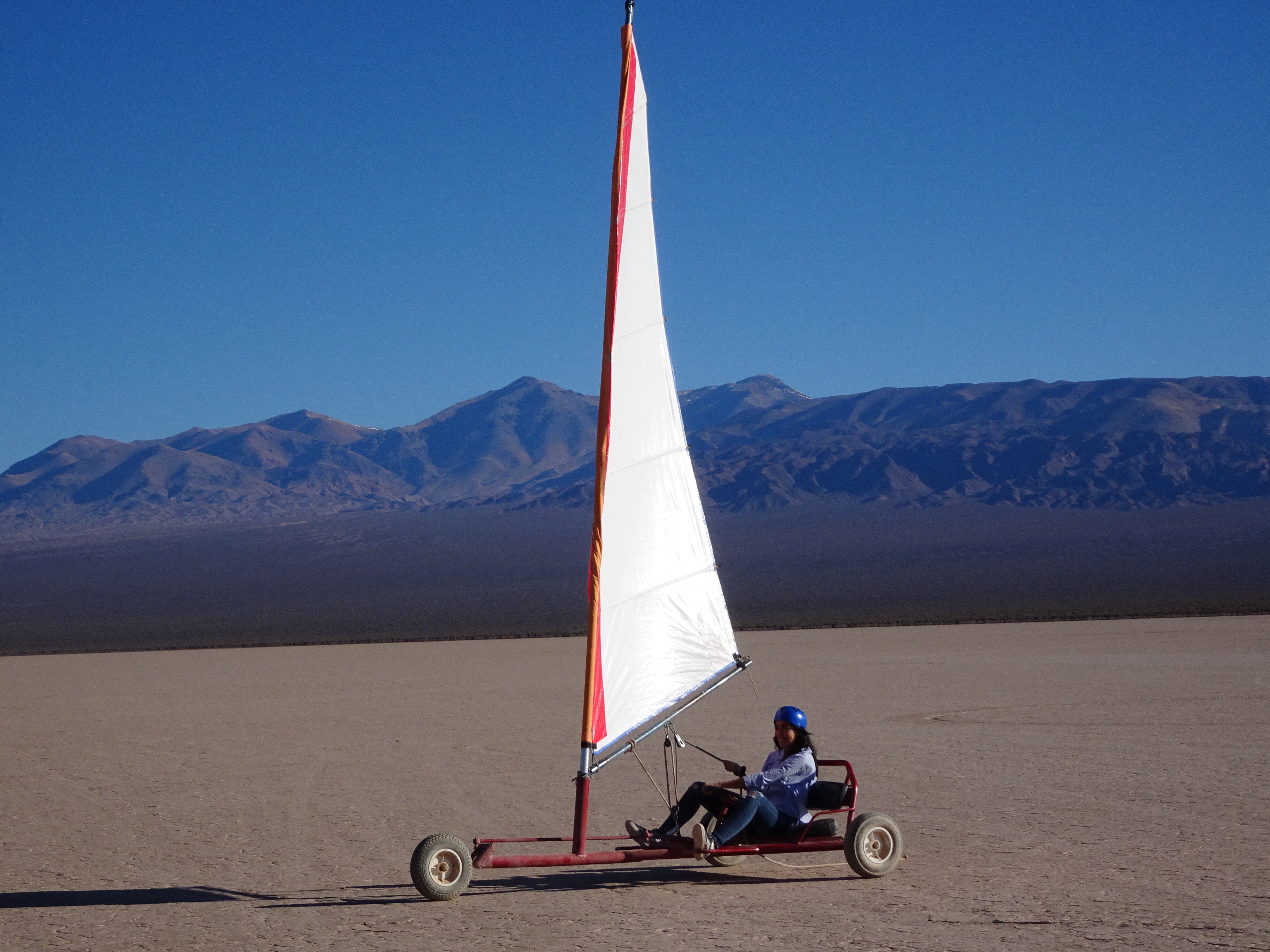 Speaking of wind, we also visited Parque Nacional Leoncita, which is famous around the world for its pampa, which is a dried  lake bed that is a perfect place for the practice of carrovelismo (land sailing). Although the wind was not too strong on the day we visited, we still had a thrilling time operating the land-sailing vehicles. Here is our guide’s daughter Victoria, having fun.

And of course there are always the gorgeous colored rocks with Andes mountain backdrop.